Breaking bones isn’t something usually to take advantage of. But Jennifer Love Hewitt found a quirky way to complement her cast after breaking her wrist during a workout injury.

The Ghost Whisperer star was seen emerging from a salon in a loose-fitting grey T-shirt which exposed a sports bra beneath – coordinated with the baby blue bandage she is currently sporting on her right arm.Jennifer claimed she suffered her affliction following a boxing routine, while attempting to get in shape for season two of The Client List.

Speaking on Twitter last Saturday, the 33-year-old wrote: ‘Guess who broke her wrist yesterday boxing to get fit for season two!;( I will be spending the weekend resting in my pjs. 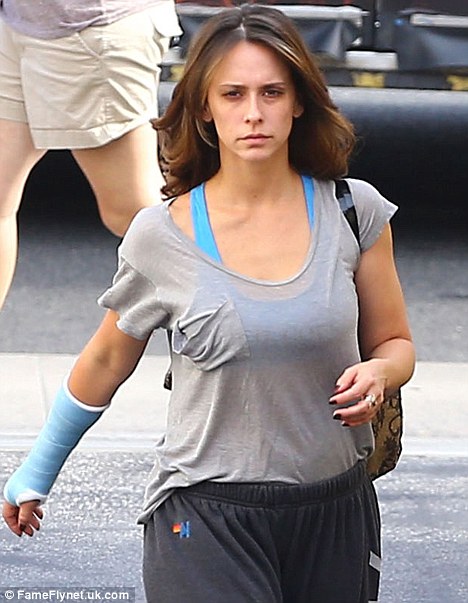 And indeed, it’s good to see the injury hasn’t prevented Jennifer from pampering herself, as she left Dry Bar Salon with perfectly coiffed hair.

However, the sleek tresses were somewhat in contrast to her casual clothes, including baggy sweatpants, trainers, and a make-up free face.