Recent reports suggested she is filming scenes in the nude for her Lifetime series The Client List. But Jennifer Love Hewitt already steaming up screens with a promo for the hit series.

The actress strips off in an advert for season two, singing the Peggy Lee hit I’m a Woman. Jennifer  Love Hewitt promoted the two-minute video on Twitter.

Sending fans to a link of her new video, she wrote: ‘NEW SINGLE “I’m a W.O.M.A.N.” available on iTunes NOW from her HIT series #TheClientList S2! GO! ;)’

Fans of the actress were surprised to hear her singing the track, produced by American Idol’s Randy Jackson. The video opens with Jennifer dressed conservatively in a suit jacket, trousers, fedora and horn-rimmed glasses, flanked by male backing dancers in similar style.

But as the lyrics roll off her tongue, she begins to bump her hips and rips off her shirt to reveal a lacy bralet.The clip features Jennifer in various stages of undress, splashing around in water, backlit on colourful backdrops as she kicks up her heels, and giving her best sultry gaze. 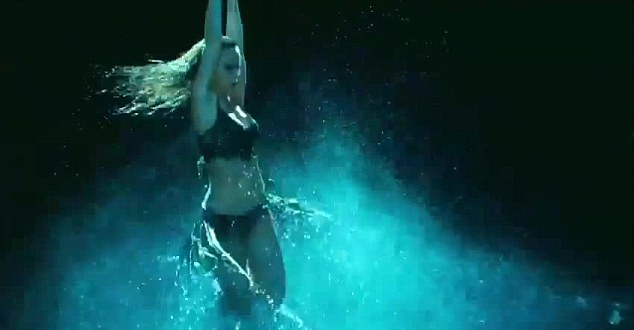 The star spoke to Entertainment that night about her inspiration for the promo. ‘I had a dream about it in the middle of the night,’ she said, adding that she’s been a long-time fan of the song from the Broadway musical, first recorded in 1962 by Christine Kittrell and made a hit by Peggy Lee. Jennifer stars as Riley – a single mother who has to get a job as a masseuse at a spa when her husband leaves her – on Lifetime’s The Client List.

She had willingly took up her new job and took her down an unexpected path when she discovers the establishment offers a special ‘happy ending’ service to a select ‘client list’.

Season two of the series was later re-scheduled to premiere on March 10.