Meghan Markle snubbed Camilla in an offer of friendship after the Duchess joined the Royal Family, claims an explosive new book. The presence of Harry and Meghan at the Queen’s funeral saw their fraught relationship with the Royal Family thrust into the spotlight.

But according to royal biographer Angela Levin, Meghan could have had a friend in King Charles’s wife, Camilla. Ms Levin claims the Queen Consort greeted the Duchess of Sussex “warmly” when she first came to London. 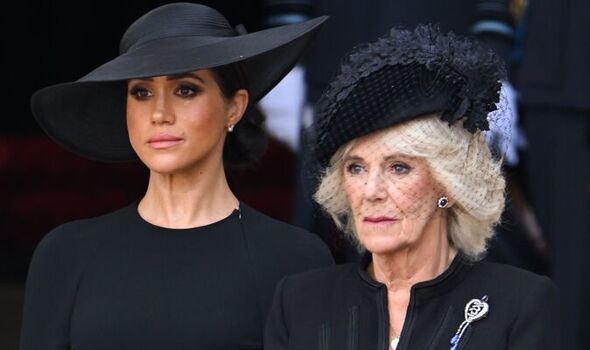 Ms Levin said Camilla knows “more than anyone” how difficult it is to be accepted into the royal fold. She added that Camilla wanted “to help any newcomer”.According to the royal biographer, the women had “lunches together” while Camilla “spent a lot of time offering advice on how to handle the pressure”, as the two formed a bond. But the author alleges Meghan did not take to the friendship.

She says Meghan seemed “bored, was unresponsive and preferred to go her own way”.

Meghan herself has spoken of the immense mental health struggles she found herself facing while staying with the royal family, even saying in an interview with Oprah that she had had thoughts of suicide.

The explosive claims, which Ms Levin bases on insight from an unnamed source, come in her new book, “Camilla, Duchess of Cornwall: From Outcast to Queen Consort”. Ms Levin added of Camilla: “She tried to be supportive, was happy to be her mentor and took her out for private lunches.” 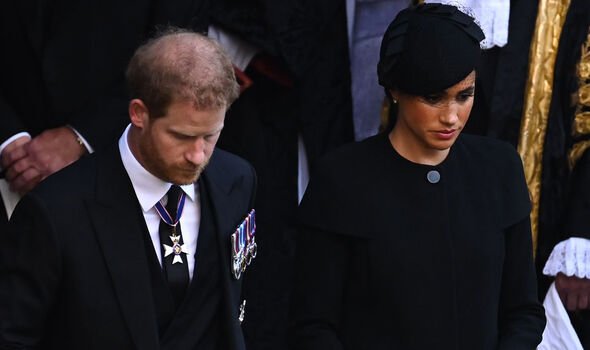 A source at the time told me: ‘She doesn’t want to see anyone struggling and she is fond of Meghan.’ Meghan, however, seemed bored, was unresponsive and preferred to go her own way, with the result that the Queen Consort’s advice landed on stony ground.”

She told of how taking on the role of William and Harry’s step mum was an “almost impossible challenge”. The Telegraph reported that, according to an insider, Harry was particularly difficult to handleThe insider said: “The Duchess always felt quite wary of Harry and used to see him out of the corner of her eye looking at her in a long and cold way. She found it rather unnerving. Otherwise, they got on quite well.”

The Sussexes sat behind King Charles and Camilla at the Queen’s funeral on Monday. Meghan has also been frequently pictured with Camilla in the last two weeks, as the Royal Family undergo a period of mourning together.