MEGHAN MARKLE has come under fire for “praising herself” as she took centre stage in Manchester to deliver a keynote speech at the One Young World summit. The Duchess of Sussex declared it was “very nice to be back in the UK” as she delivered her hotly-anticipated address where she told young leaders “you are the future… you are the present”.

But Meghan, 41, was criticised for praising herself. Ingrid Seward, editor-in-chief of Majesty Magazine, said the duchess’ speech “was just ‘me, me, me’ and praising herself”. Meghan last night became the first person to deliver an in-person address in Britain since quitting as a working royal amid Megxit more than two years ago.

The former Suits actress told the 2,000 audience members how her life had changed when she last joined the summit in London in 2019 – singling out her role as a wife and a mother – but making no mention of becoming a senior royal the year before.

She said: “I joined you in London in 2019. And by that point, it’s fair to say, my life had changed rather significantly. I was now married, and I was now a mom,” she said, leaving a pause at the end which was filled with huge cheers from the audience.

Speaking about her first child son Archie, she added: “My world view had expanded exponentially, seeing the global community through the eyes of my child”.

The former Suits star, who was dressed in a vivid red high-necked sleek trouser suit, smiled broadly and held hands with her husband, the Duke of Sussex as they made their way through the auditorium to huge cheers, as delegates held up their phones to film them.

During the proceedings on Monday, the couple sat in the front row on stage, side by side on a bench, as they joined One Young World counsellors to watch the flag bearers enthusiastically parading the flags of more than 200 countries.Meghan, with her hair in a ponytail, swayed in time to the music, which included Dancing In The Streets and Respect, as she clapped her hands. 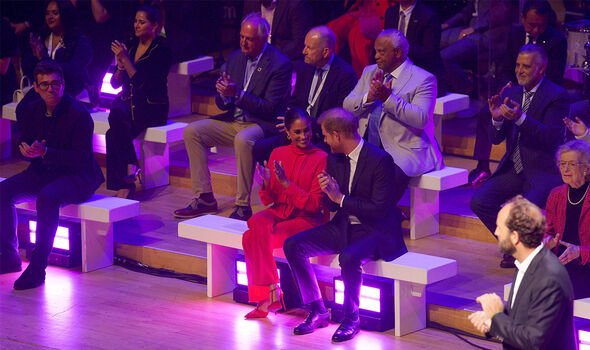 Harry leaned over to whisper in his smiling wife’s ear a number of times. To cheers, Meghan said in her speech: “I’m thrilled that my husband is able to join me here this time.

“My husband has long advocated for important and necessary impact in the world, focusing a huge part of his life’s work on the youth.

“For both of us, bearing witness to the power that you hold in your hands and the unbridled enthusiasm and energy that you have to see things come to fruition, it is just an absolute privilege.”

In Manchester’s Bridgewater Hall on Monday evening, Megan also spoke about the first time she was asked to be a counsellor for One Young World in 2014 and having a “pinch me moment”.”And there I was, the girl from Suits. I was surrounded by world leaders, humanitarians, prime ministers and activists that I had such a deep and long-standing respect and admiration for. 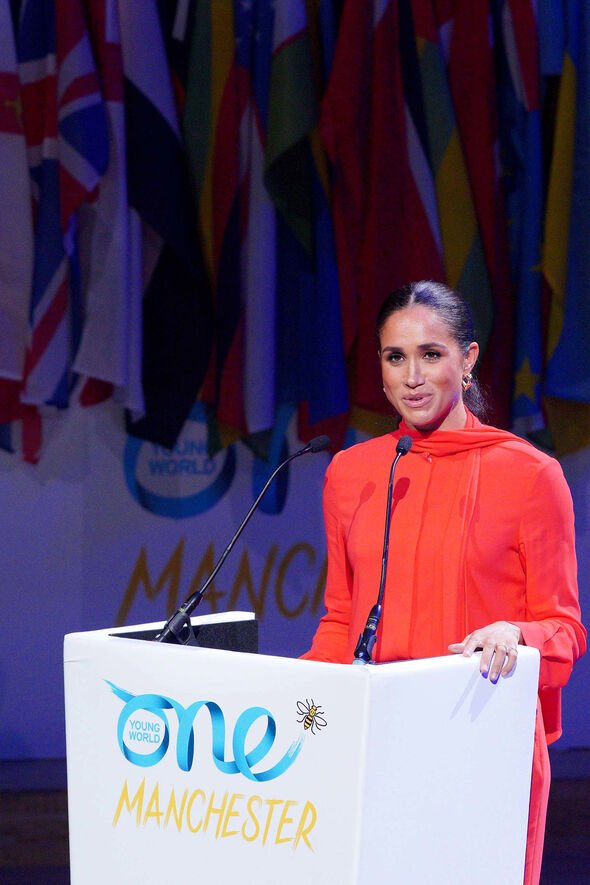 “And I was allowed in, to pull up a seat at the table. “I was so overwhelmed by this experience, I think, I think I even saved my little paper place-marker with my name on it.

She added that she had doubted herself despite her what she saw as her “important and meaningful” work, but said One Young World had seen in her “the present and the future”.

“I was so nervous, I doubted myself and I wondered, wondered if I was good enough to even be there? “What I was doing in the world, albeit important and meaningful as far as I saw it, was it deserving to have a seat at this table?

“But One Young World saw in me what I wanted to see fully in myself. They saw in me, just as I see in you, the present and the future.”

The duchess told the delegates: “You are the future, but I would like to add to that you are also the present. You are the ones driving the positive and necessary change needed across the globe, now, in this very moment.”